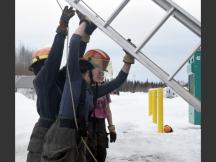 Joshua Diaz was thrown out of a window and excited about it.

The Kenai Central High School senior is the smallest of 10 district students participating in Nikiski Fire Station No. 2’s basic firefighter academy, which means he’s the one going out the window.

“We were practicing ladders and I’m tiny so I got thrown out the window from the fire,” Diaz explained. “We had learned knots before that, lots of them, and a lot of different smoke drills and rope rapelling. It’s all so exciting and fun and interesting”

The week-long academy held the week of March 12-16, is a first for the Kenai Peninsula Borough School District, who was able to send the ten students to Nikiski to earn their state certifications through grants, according to Stephen Robertson, an adjunct professor with Kenai Peninsula College and engineer firefighter in Nikiski.

“This is the pilot program for the district,” Roberston said. “It’s your first step into firefighting, to get someone certified and be able to have that base knowledge of it.”

The station has offered similar programs in the past, through EXCEL Alaska for Western Alaska students, but this is the first time Kenai Peninsula students had the opportunity to earn their certifications in the local station.

“The cool part for us is that we can get them hooked now,” Robertson said. “If they get hooked on it young, then they have a long, healthy career ahead of them and it starts to replace the older guys.”

The academy met five days a week from 8 a.m. to 5 p.m. throughout the student’s spring break and, while most students usually tend to avoid tests over the holidays, the week culminates in a written exam.